It will come as no surprise to regular listeners that the left is completely out of control. From your everyday reality detached meltdowns, to rioting during the inauguration, to shutting down right wing speakers at the home of the free speech movement and assaulting women, they have come completely unhinged. Routine travel restrictions are a “Muslim Ban” and suddenly our snowflake counterparts are concerned about executive orders and restraining the powers of the president.

It’s almost like they are trying to live up to how they portrayed the Tea Party in 2009-2010. Here’s what one Democrat adverisement said about them when they were active;

The right wing extremist Republican base is back. They lost the election. They lost on the recovery act, the budget, and children’s health care. They’ve lost the confidence of the American people, after 8 years of failed policies that ruined our economy and cost millions of jobs. Now, desperate Republicans and their well funded allies are organizing angry mobs, just like they did during the election. Their goal? Destroy president Obama and stop the change Americans voted for overwhelmingly in November. This mob activity is straight from the playbook of high level Republican political operatives. They have no plan for moving our country forward, so they’ve called out the mob. 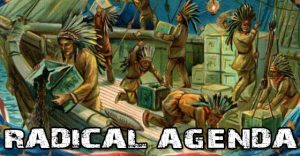 Change the word Republican to Democrat, subtract any real knowledge of the issues, add some actual violence to the equation, and that could be a Republican ad against the leftist lunatics in the streets today. In fact, one might draw an even more literal line to the historic raid that left a harbor full of tea.

Conservatives never destroyed anything, except Democrat majorities of course, during their protests. Leftists certainly aren’t protesting high taxes, but they are in a sense closer to the much famed “Boston Tea Party” in that they at least smashed the windows of a Starbucks. Indeed, one organizer of the anti Milo riots in Berkeley said smashing windows to the tune of $100k was “stunningly successful” and they would gladly do it again. And while there was plenty of talk in conservative circles of impeaching Obama, House Democrats are already discussing the impeachment of Trump, less than a month into his presidency because he is “wrapping his arms around Putin, while Putin is continuing to advance into Korea”. Nevermind that Putin is not advancing into Korea, the facts are besides the point.

Now, Republicans fear violence from left wing “protesters” as they work on repealing Obamacare. Even poised libertarians like Tom Woods are starting to raise their voices, following calls to defense from the likes of Lauren Southern, and the acknowledgement that the time for arguments may be over from Stefan Molyneux.

If the Boston Tea Party was a prelude to the first American revolution, could it be that we are on the precipice of a second? Let me know your thoughts at 747-234-2254 or RadicalAgenda on Skype.

Join us, this and every Wednesday, as well as Mondays and Fridays from 5-7pm Eastern for another exciting episode of the Radical Agenda. It’s a show about common sense extremism where we talk about radical, crazy, off the wall things like political violence.

Listen live on the TuneIn app! Join the chat on YouTube! Got Roku? We’re on there too! Or add the raw stream to your favorite streaming app! Get the podcast on iTunes, Stitcher, Google Play, Roku, RSS, or RadicalAgenda.com. I’ll also be streaming to UStream and Facebook today.

This production is made possible by donors like you, you can also help by shopping through my affiliate links. Without that support, this site will cease to exist.